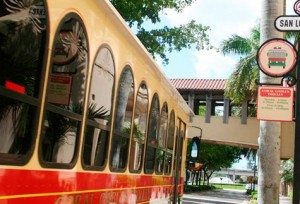 In the course of the life of a new condominium development, several milestones can be anticipated, the most ubiquitous of which is the groundbreaking ceremony.  How many photos of shovels in sand can a publication be expected to print?  When it came time for the groundbreaking of 1060 Brickell Avenue (known originally as Avenue) in downtown Miami, Extell Development Company challenged us for some outside the (shovel-in-sand) box thinking.

To capitalize on its downtown location and the views from the higher floors of the twin condo towers, we decided to provide brokers, prospective buyers and the media with a “view from THE Avenue” and hired a hot air balloon company to take guests on a tethered ride on the site.

With a logo banner suspended from the top of the giant hot air balloon, guests were invited for a ride to experience the view from what would soon be 1060 Brickell Avenue. The Mayor and City Commissioner were invited for a photo op with the developers and traditional hard hats and shovels, however, the backdrop for the picture was a little non-traditional in that it stood 20-feet high and was filled with hot air. The spectacle could be seen for miles around and several guests were lured to the site after seeing the balloon rise and fall from the nearby highway

While guests sipped cocktails and enjoyed hors d’oeuvres, rides up and down in the balloon continued for three hours.

Media coverage not only included the groundbreaking stunt, but also included local and national marketing stories crediting us for reinventing the staid groundbreaking ceremony. So excited was one prospective buyer, that he actually purchased a unit at the event.