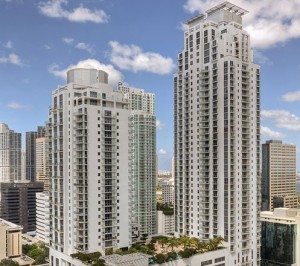 Our challenge was to create an exciting, memorable public relations event for a new Brickell Avenue real estate development. During construction of a new condominium, several milestones can be anticipated. The most typical and well-known is the groundbreaking ceremony. The moment is captured in time by a photo of shovels in the ground. And important people in hard hats. But how many times will the media publish this kind of photo? So…when it came time for the groundbreaking of 1060 Brickell Avenue in downtown Miami, our client challenged us for some outside the (shovel-in-sand) box thinking.

To capitalize on its Brickell location and the views, we tried something different. The Miami project’s original name was AVENUE. For that reason, we provided buyers and the media with a “view from the AVENUE.” We hired a hot air balloon company to take guests on a tethered ride on the site. It was most definitely one of the most memorable real estate groundbreaking events Miami had ever seen. We wanted a public relations activity that would long be remembered.

With a logo banner suspended from the top of the giant hot air balloon, guests were invited for a ride to experience the view of Brickell and Miami. The Mayor and Miami City Commissioner were invited for a photo op with the developers. The backdrop for the picture was non-traditional. The colorful balloon stood 20-feet high and was filled with hot air. The spectacle could be seen for miles around. Several guests were lured to the site after seeing the balloon rise and fall from the nearby Miami highway.

While guests sipped cocktails and enjoyed hors d’oeuvres, rides in the balloon continued for three hours.

Media coverage not only included the groundbreaking stunt, but also included local and national marketing stories. We were credited with reinventing the groundbreaking ceremony. So excited was one prospective buyer, that he actually purchased a unit at the event. This unusual event became a hallmark of our public relations approach. We look for ways to get noticed but always with a strategic message in mind.